It is with deep sympathy that we announce the passing of Past President Frederick Robert “Bob” Seibel, III of the Cape St. Claire Volunteer Fire Company.

Mr. Seibel joined the Cape St. Claire Volunteer Fire Co., Inc during its first year of existence (1955) and grew with the company. During the ensuing years Mr. Seibel has held all of the fire line officers positions, including the office of Chief (county recognized) on two different occasions. Along with the line officer positions, Bob was elected to each of the Administrative Officers, several of which he held several times. He, along with holding the various offices, served on many of the company’s committees (as a member or chair).

In 1959 Mr. Seibel joined the Career Fire service at the U. S. Naval Academy. He progressed through the ranks until his retirement in 1982 as the Assistant Chief.

In 1969 ‘Bob” became a “Certified Level II Emergency Services Instructor” for the State of Maryland. He has served successfully in this capacity to the present.

Also in the ‘60s he was appointed to the Executive Committee of the Maryland State Firemen’s Association. Following his term on the Executive Committee, he was appointed to the MSFA Transportation Committee in 1970, and in 1971 was named its Chairman, he chaired this committee for fourteen years, during which time he initiated many changes and instituted new forms and procedures n dealing with the Maryland Motor Vehicle Administration, most of which are still in effect to this day.

In 1976, Governor Mandel appointed, Mr. Seibel to the original “Maryland Fire Rescue Education Training Commission.” He served the Commission with Distinction and Honor for ten years when his retirement from the “Career Service” forced him to not seek reappointment.

Bob has been active on several committees of the Anne Arundel County Volunteer Firefighters Association for many years. In 1982 he was elected Second Vice President, and served as President in 1984-1985. Since that time he has remained active on committees, and has served as a Trustee since 1993. Bob, aka “The Godfather” served as a Trustee from 1993 to 2009 when he voluntarily did not seek re-election. During his tenure, Bob was responsible for all of the Association property. When President Marie McHugh wanted a building to store all of the property, it was Bob who found a shed and built out the inside to allow the storage of property. Bob also named it the Marie McHugh Memorial Shed. When the Headquarters building was extended and an office and conference room was provided for the Association, it was Bob who acquired the filing cabinets and had pictures of all the stations framed and lined the walls. Bob was named Anne Arundel County Volunteer Firefighters Association Trustee Emeritus at the 2016 Convention meeting in Lake Shore.

Bob has been very active in the Maryland Fire Chiefs Association. Bob was named a Life Member in 1982. We was awarded the William G. Perry Award for unselfish effort and dedication in 2010.

Bob was inducted into the National Fire Heritage Center Hall of Legends, Legacies, and Leaders at the October 2016 meeting in Emmitsburg, MD.

The family has donated Bob for medical research and plan on having a celebration of life when time allows. 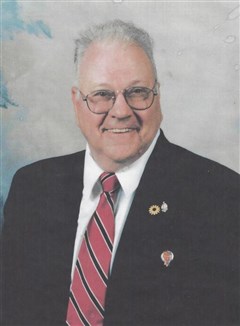